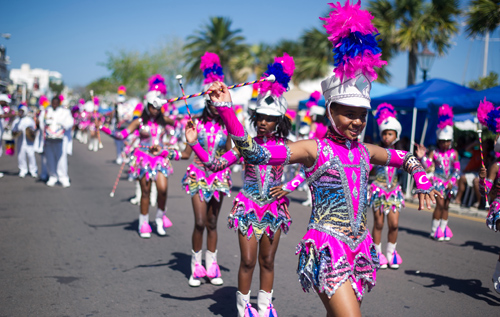 Proudly organised by the Department of Community and Cultural Affairs with support from City of Hamilton.

The Bermuda Day Parade begins at 1:30 PM. The parade will begin along Marsh Folly Road and continue right through to the top of Cedar Avenue. The parade then turns left onto Church Street, takes a right down Court Street, a right along Front Street, and finally up Queen Street. Floats will make a right turn on Church Street, park in front of City Hall and remain there on display throughout the afternoon. Dance groups will have a final performance in City Hall Cark Park. (Dance trucks will turn left onto Wesley Street, then move back through the City via Park Road). Click here to view route map (PDF).

History: The first Bermuda Day Parade was held in 1979 and it has remained an annual celebration ever since … read more

The 2017 Heritage Month Theme is a celebration of Bermudian sporting heroes and Bermuda’s favourite sports and games. More than simply a past-time for children, sport has always been an opportunity for demonstrating determination, teaching teamwork, and exemplifying excellence. Whether you reflect on Bermuda’s nautical beginnings and current historic hosting of the America’s Cup, if you are a fan of football, or if you hit sixes at cricket, there is no denying the passion that sport inspires. Even amateur marble players, rope jumpers, and traditional game participants are part of the storied legacy of Bermuda’s sports. From the fierce loyalty to Cup Match teams, to the rallying unity to support a Bermudian Olympian, Bermuda has continued to build a sporting heritage to be proud of.

Bermuda Gombeys, dance troupes, majorettes, Djs and musicians in front of and aboard a colourful parade of decorated floats slowly and joyously wind through the streets of Hamilton The competition between floats is fierce, as they compete for prizes in a variety of categories.  Parade Entry Categories 2017

No comments to show.